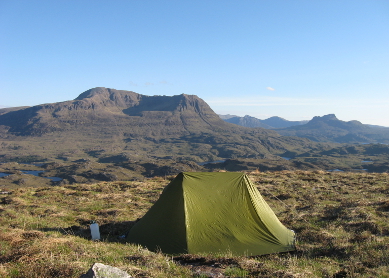 Scotland has among the best access rights for walking and wild camping in Europe. In 2003 the Land Reform Act formalised a general right of access to open mountain, moorland and forest and a general right to wild camp away from habitation. It created a framework for responsible access to land and inland water, based on the tradition in Scotland of unhindered access to open countryside. The only condition is to avoid disturbing activities on which people's livelihoods depend, such as farming, forestry operations, fishing, grouse shooting and deer stalking (stag stalking is from 1st July to 20th October, click here for details). Such restrictions do not generally apply to land owned by charities such as the John Muir Trust and National Trust For Scotland.

With rights come responsibilities and these are laid out in the Scottish Outdoor Access Code. When wild camping, it is important to leave no trace, carry all litter out, avoid polluting watercourses and minimise disturbance of wildlife. Chosing a really good wild campsite takes practice, the main criteria are:

There has been a recent trend in outdoor magazines to provide grid references of "suggested" wild campsites. Although newcomers to wild camping might appreciate not having to choose a site, such advise could lead to sites becoming over-used and hence no longer "wild". There are millions of suitable locations for wild camping in Scotland, and there is a special feeling of camping somewhere that no one has apparently camped before. The maps on this website show approximate locations where I camped, but these are not prescriptive - where you stop depends on how far you're prepared to walk in a day, what time you started and the adversity of the weather conditions.

In comparison with Scotland, there is no legal right to wild camp in England and Wales, with the exception of some parts of Dartmoor (although wild camping is generally tolerated in mountain areas away from habitation). Access in England and Wales is limited to public rights of way and areas of designated access land (Countryside and Rights of Way Act 2000).